The First Day of Tesseracts - an interview with John Robert Colombo, and Claude Lalumière

The First Day of Tesseracts

Welcome to the First Day of Tessseracts.  Today we are featuring two mini-interviews, one with Toronto author/Tesseracts Fourteen: Strange Canadian Stories co-editor John Robert Colombo, and one with Claude Lalumière.

TT(Totally Tesseracts): Hi John. Thanks for joining us for the First Day of Tesseracts?  Could you tell us a bit about your contribution to Tesseracts Fourteen: Strange Canadian Stories.

JRC: My contribution to "Tesseracts 14" is the Introduction, just as my co-editor Brett Savory's contribution is the Afterword. Not to be overlooked is the contribution of Brian Hades, who shouldered the publisher's responsibilities.

What are some of your favorite things about the anthology?
JRC: I like the anthology's subtitle "Strange Canadian Stories." Every word of the subtitle is true!  I enjoy the feel of the book, its cover, its heft, its binding, its typeface. The stories too!

The theme of the book is Strange Canadian stories.  Can you tell our readers one of the strangest experiences that you have ever had?

JRC:  The strangest experience that I ever had took place in the border town of Petrich, Bulgaria, where my wife Ruth and I were introduced to Vanga Dimitrova, the most famous psychic in Eastern Europe. The old blind woman proceeded to tell us details about our lives that nobody at the time (including ourselves) knew to be true. Truth is indeed stranger than fiction, not that the 20-odd stories and poems in "Tesseracts 14" are not strange! 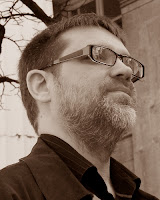 TT: Also with us today is Claude Lalumière, who lives in Montreal.  Thanks Claude for joining us.  Can you tell us the name of your story in Tesseracts Fourteen?

CL: The name of my story is Vermilion Dreams: The Complete Works of Bram Jameson

TT: What inspired you to write your story?

CL: There are two answers to that question.
First, it's part of a series of stories I'm writing on the fictional insular city-state of Venera. The series started to take shape in my mind during a 2006 trip to Europe. The kernel of the concept for the series was conceived in Venice, and Venera itself is very much inspired by Venice, but elements of both Rome and Barcelona also contributed to the makeup of the city-state. It's been slow work, much slower than I'd anticipated, finishing the stories. "Vermilion Dreams" is one of only two completed and published stories in the set (I have at least a half dozen others in various stages of production).

But "Vermilion Dreams" itself was written very quickly. I conceived of that story in spring 2008, after reading J.G. Ballard's memoir, MIRACLES OF LIFE, in which I learned that he was dying of cancer (he has since died). Ballard is one of my heroes, and my favourite writer. I was profoundly affected by the tragic news, and deeply moved by his autobiography. Within an hour of finishing the book, I had begun writing "Vermilion Dreams" as an homage to Ballard. Readers will certainly notice parallels between the works of my mysterious author Bram Jameson and those of Ballard. When other parallels and concordances presented themselves, I also threw in nods to other aspects of twentieth-century pop culture, as my journey through the oeuvre of "Bram Jameson" is also a circuitous journey through a strange secret history of the twentieth century.

John Robert Colombo is the Toronto-based author and anthologist whose byline appears on over 200 books of quality.
Posted by EDGE Science Fiction and Fantasy Publishing at 9:38 AM